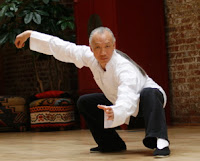 • Increases awareness, facilitating the mind and body to work together ensuring the best function for the whole being
• Keeps injuries at bay and quickens recovery from illness and injury
• Increases focus and concentration
• Assists to regain, maintain and sharpen physical and mental balance
• No impact exercise - instead, soft and gentle movements
• Relieves arthritis pain by promoting the flow of the body's natural lubricants
• Assists in lowering and managing high blood pressure
• Improves digestion
• Reduces pain and helps manage headaches
• Helps to maintain regularity
• Improves blood and lymphcirculation
• Regulates body temperature and comfort
• Improves the quality of sleep
• Improves stamina and helps the body to recover from overworking
• Tones and smoothes the skin
• Improves and maintains flexibility and elasticity of the body

Master Frank Fong emphasizes soft and gentle movements to promote stress relief, mood enhancement, and a relaxed temperament. His chief goals for his students are self healing and inner development. Step by step, he will help students find their own path and build their own strength and confidence, leading towards a healthy body, a happy spirit, and a better life.

Master Fong is from China (Hong Kong), where he learned from three grandmasters. He has been practicing Tai Chi for more than 45 years, and has been teaching it for 30 years. Fong has shared his art in Tai Chi classes through many organizations. He continues to improve on the skill and knowledge by traveling periodically across the U.S., Canada and China to share and exchange techniques with other Tai Chi masters and teachers. He can be contacted via email at f.fong@cox.net.

What is a poetry Slam?
It's competition poetry; meaning humor, politics, enlightenment, sex, entertainment masquerading as literature, literature masquerading as entertainment. Poets will read, then judges will flash Olympic-style scoring to determine who goes on to the next round until there's just one poet left standing as the champion. It's a lot of fun!

Hosted by Matt Mason. Open mic starts at 7:30 followed by the slam; sign up BEFORE 7:30 as signup is limited and will only be allowed after 7:30 if less than 8 are in the slam.

In its first year in Omaha, 12 high schools are competing in Louder Than a Bomb, the world-renowned poetry slam festival started in Chicago 12 years ago.

"Ask any Louder Than a Bomb participant and they'll tell you: the poetry is the point, not the competition," said Matt Mason, Executive Director of the Nebraska Writers Collective, the organization bringing Louder Than a Bomb to Omaha. "But meeting other students and hearing their stories, and being able to share theirs, is an important part of the Louder Than a Bomb experience."
The twelve high schools that are participating are:
The competition begins with preliminary rounds on April 15, 17 and 18. The first round is held at PS Collective (6056 Maple Street) on Sunday, April 15 at 2 p.m., 4 p.m. and 6:30 p.m. The second round will be held on April 17 and 18 at the OM Center, 1216 Howard Street at 6 p.m. and 7:30 p.m. both days.
The event culminates with the final competition on April 20 at 7 p.m. at Creighton University's Harper Center Auditorium on 20th Street between Webster and California Streets. The public is welcome to attend the events. Events are free, $5 donation suggested but not demanded. For more information, visit ltabomaha.org.
About Louder Than A Bomb
Louder Than a Bomb is a teen poetry festival founded in 2001 by Young Chicago Authors. As they put it, the event aims, “to bring teens together across racial, gang, and socio-economic lines, LTAB is a friendly competition that emphasizes self-expression and community via poetry, oral story-telling, and hip-hop spoken word.” It focuses on cooperation, with teams of students working together to write, revise, and rehearse their performances. Now more than 600 teens from over 60 Chicago schools participate, and the event was recently the subject of an award-winning documentary from Siskel/Jacobs productions.
Contact: Matt Mason, matt@ltabomaha.org, 402/680-8755  http://www.ltabomaha.org

Apr. 28 - "Introduction to Leadership Skills for the 21st Century Through The Way of the Horse"
with Brent Bowyer & Tulip the Horse
1-3pm • $15

Discover the great value of Consensual Leadership. View excerpts from “A Pioneering Spirit” PowerPoint presentation and participate in an open discussion session about the value of horses as an innovative approach for developing Consensual Leadership.
Participate in an Equine Facilitated Experiential Learning session with Tulip, a minature horse, to test your body awareness and leadership potential. No horse experience is necessary.
Brent Bowyer, Bach.Soc.Sc., Dip.Ed., is a New Zealand native with degrees in education and psychology. He has studied at the Beshara School of Esoteric Education in Scotland. A qualified Epona Instructor and Tai Chi practitioner, he currently lives and works with horses to educate people in “The Way of the Horse.”
Register online at www.spiritofchiron.com, via Brent at 712-308-2052, or to OM at 402-345-5078.
Posted by Omaha Healing Arts Center at 12:45 PM No comments: